Given the following snippets of code, evaluate the print statements: (assume python 3.X)

to the clock attribute, cycling back to 0 when appropriate, also if any employee

to subtract from the captial balance (can go negative)

-a String representation should be in the format:

-Constructor takes the same parameters of the attribute and initializes everything

as was done in the parent, but has 3 new empty lists: food wanted by patrons,

-attractPatron adds a patron to the list of waiting patrons, and adds all their

food wants to the list of wanted food. Print out a message that the patron entered

-Override the advanceHour  all the prior functionality should be maintained,

but iterate through each patron, and attempt to wait on them with employees

that are on duty and not busy (food list should be modified by the wait staff).

If they become satisfied from being waited on, then remove them from the wait

list and add their bill total to the business capital. Following checking patrons,

check for food wanted...if their is staff available (same checks as above) have them

cook the food, when cooking move the food from the want list to the available

list. After patrons are waited on and food is being cooked...make all staff available

again for the next hour.

-The constructor should take two parameters, the patron’s name and the food they

want (given as a list of Food objects). It initializes those attributes as well as a

-isSatisfied checks to see if the patron doesn’t have anymore food wants...if empty

then they are satisfied

-getWants returns a reference to their food wants

-Constructor is initialized with a name, salary, and start time through the parameters. It also initializes two dictionaries that represent task skill levels and task

create a new key in the dictionary with that; when creating an entry also create

working (assume their shifts are 8 hours)...so is the time within 8 hours of the

be specifed)...also allow a variable length key word arguments to be used in subclasses.

suited to do that work, and return False indicating the work was not done

are too busy and return False

that the task is being worked on

-makeAvailable iterates all skills and sets the business level to 0

-isBusy if any business level equals their skill then they are busy...otherwise they

are not busy (False)

**Above indicates he is 1 unit occupied with fishing, but his skill is 2 so he could

-behaves just like a normal employee, but has added effects when either ’serving’

-work has been extended...still does the same checks to see if skilled or busy...if

not busy ... i.e. parent class method says you can successful work on the specifed

*if serving, need a patron and the foodAvail list passed in through the keyword

arguments: print out that the patron is being waited on and remove any food

that satisfies the patron’s wants...that food must be served to the patron (so

*if cooking, need the food they should be making...all that is needed is a print

statement stating that the employee is making that food

or the food was successfully cooked...if indicated as unskilled or busy from

the inherited method, pass on the False value so that work maintains its

This assignment has been answered 4 times in private sessions. 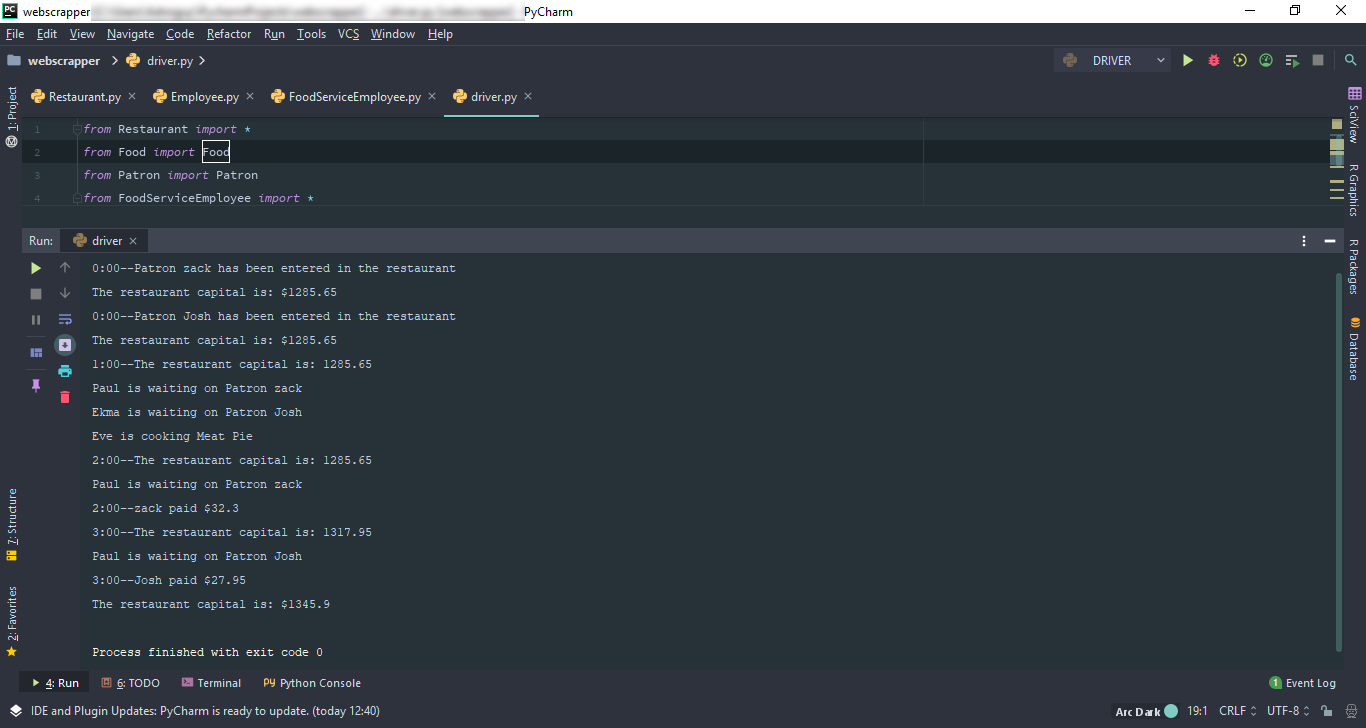 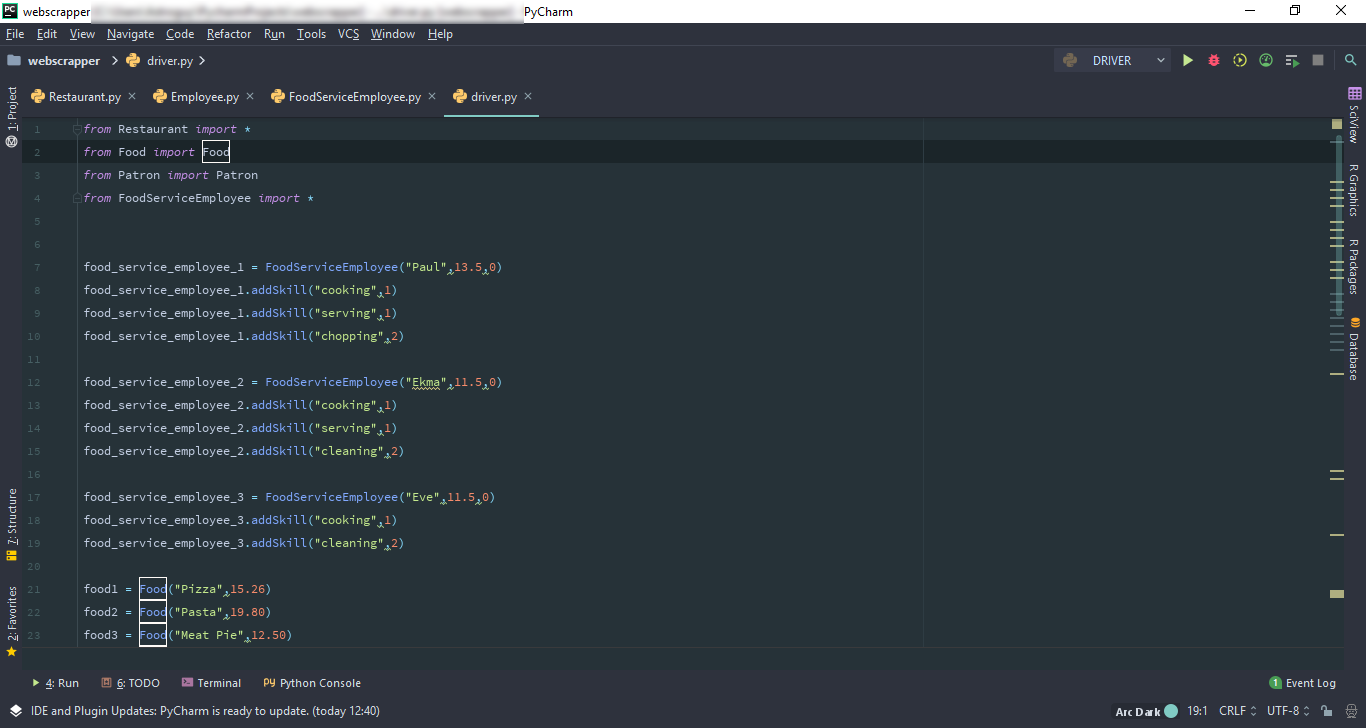 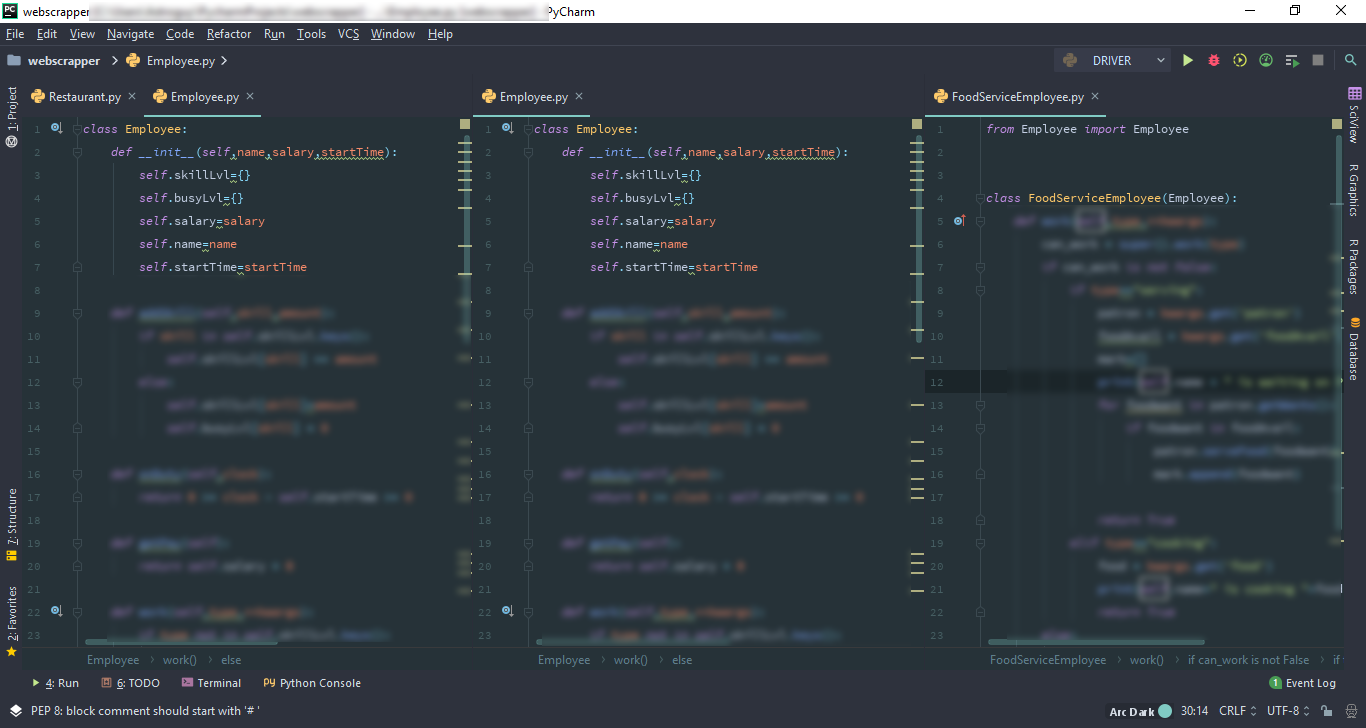