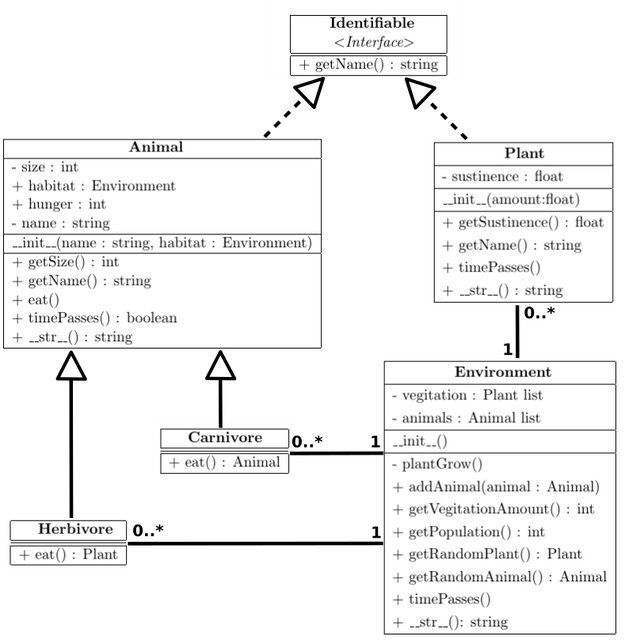 NOTE: Make sure to know what is public versus private (habitat and hunger and public attributes so that the sub-classes can access them). plantGrow function is private since we don’t want outside forces adding vegitation; it should only be controlled by the environment itself

– Constructor takes a single positional argument, sustinence, which is the amount of hunger it satiates. It should initialize the associated attribute.

– getSustinence is the accessor method for the attribute

– a String representation should be in the format: (\ <sustinece level>/)

– Constructor takes two parameters, a name of the animal (required, no default value), and the environment object in which it lives - default to None. size should be set to 1 and hunger to 0 (i.e. small baby and not hungry just yet)

– getSize is the accessor for the size

– getName is the accessor for the name

– eat – should just subtract one from the hunger, (or set to zero - should not go negative)

– a String representation should be in the format: <name>(size:<size>) has a <hunger> hunger level

– override the eat function. It should check the animal’s habitat to see if it is not the only animal. If it is it cannot eat so it return’s None. If it is not the only animal in the habitat it should get a random animal that is not itself and eat it. Hunger should go down by the eaten animal’s size (again do not go negative), and return the animal that was chosen to be eaten.

– override the eat function. It should check the animal’s habitat to see if there is any plant-life.  If there isn’t it cannot eat so it return’s None.  If there is plants  it should get a random plant and eat it. Hunger should go down by the eaten plant’s sustinence level (again do not go negative), and return the plant that was chosen to be eaten.

– The constructor should take no parameters, two lists should be initialized to be empty and then 5 plants should be grown to start the environment (use private function to help grow plants)

– plantGrow creates a plant object with a random sustinece level from 1-5 and adds it to the vegitation list.

– getRandomPlant returns a random plant from the vegitation list

– getRandomAnimal returns a random animal from the animals list

– timePasses All animals must first eat, keep track of the items that were eaten. (To make things simplier you can allow multiple animals to eat the same thing). After everything has eaten, remove the animals/plants that were eaten, and print a message showing what has died. Then pass time for all remaining animals and plants, if something has starved make sure to remove them as well. Then because animals produce fertilizer create a number of new plants equal to the number of remaining animals.

– a String representation should be in the format: <number of animals> animals,<number of plants> plants, followed by the list of each plant and each animal